K-pop's global army of fans have used technology to connect with their favourite artists for the past two decades – and have changed the internet for everyone. 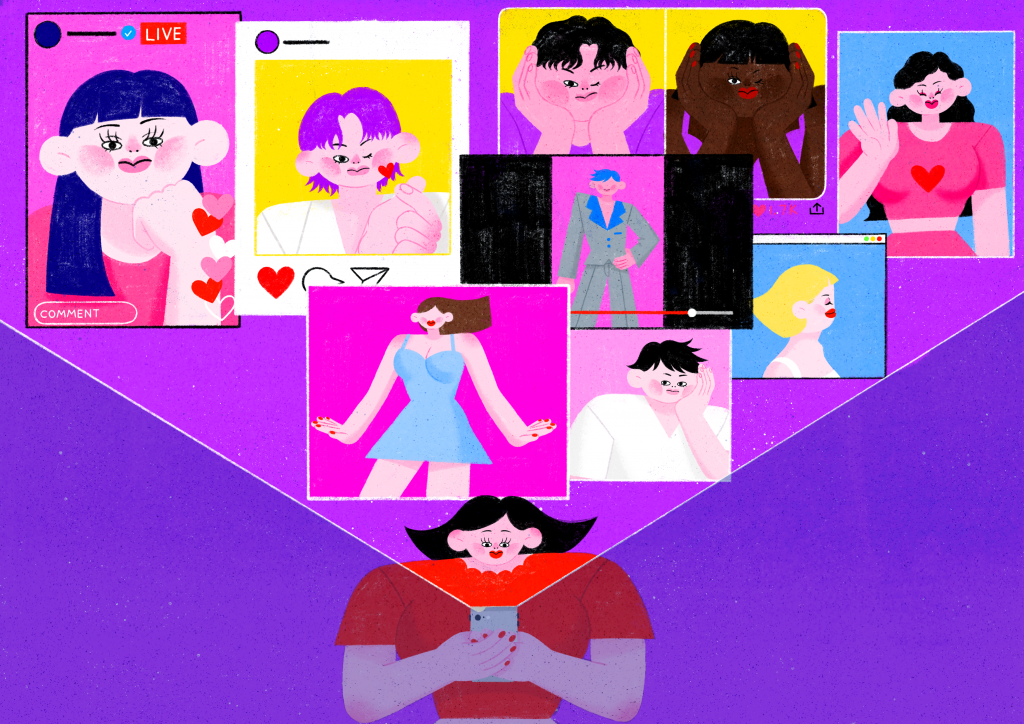 Korean pop music (K-pop) has become a global phenomenon, and the use of social media within its fan – or ‘stan’ – culture, has only amplified it. From Twitter to TikTok, fans and K-pop idols have harnessed social media platforms and are practically everywhere: think BTS, TWICE, Red Velvet, SNSD and more.

Rising alongside the internet and social media, K-pop has been growing for over two decades. In 2019, BTS were the world’s top-earning touring group, with 1.6 million attendees during the course of 42 shows in 2018-2019. According to Forbes, the Korean septet “outgrossed legacy rock acts like the Rolling Stones, Metallica, KISS and even the Backstreet Boys”. In addition, BTS are officially the most streamed group of all time on Spotify with over 16.3 billion plays across their singles and albums. The K-pop industry is worth billions to the South Korean economy.

A surge in new technology and online platforms, including dedicated Korean fan website WeVerse, combined with ride-or-die stans, has cultivated a space for K-pop’s followers to interact with their favourite idols. These forms of online access have significantly reduced the necessity for geographical proximity, but they also reduce the crucial boundaries between the fans and their idols.

Dubbed the world’s top recording artist by the IFPI, with an estimated 90 million fans across the globe, BTS have praised social media for being one of their key tools for success – and have won Top Social Artist at the Billboard Music Awards five consecutive times. BTS are a Grammy-nominated Korean septet, who constantly break records. Their first English song, Dynamite, went double platinum and their 2020 album, Map of the Soul: 7 was the only pop album to go platinum that year. They are one of the most successful groups of the decade, and the undisputed kings of social media.

In honour of their eight-year anniversary on 13th June, a two-day festival and online concert – MUSTER SOOWOOZOO 2021 – was streamed by 1.33 million paid viewers in a total of 195 countries. Their most recent tour, the Love Yourself World Tour, attracted an audience of 2 million over the course of 14 months.

Globally, the lyrics, dialogues, and messages of BTS are translated and shared worldwide, which has made BTS into The Beatles of the YouTube generation and a hero at the periphery. Conversely, the success of BTS has proved the existence and value of YouTube technology.”

From having 19 out of the 30 most retweeted tweets on Twitter – breaking records as usual – BTS utilise social media like many celebrities by posting regular selfies and videos. They also regularly interact with fans on exclusive platforms using Weverse and live video streaming site VLIVE, along with other K-pop groups. With Weverse providing tons of content, from Run BTS, Bon Voyage, In The Soop and many more, fans are constantly engaged with their favourite celebrities even beyond performances. Fast Company noted that Weverse has over 1.4 million users and Weverse Shop – where fans purchase merchandise – has over 1.8 million users from 200 countries.

In a Billboard interview, Bang Si Hyuk, the founder of HYBE Corporation and Big Hit Music, who manage BTS, credited social media as one of the reasons for the success of BTS. He noted that “we exchange the same contents, sensations, and enthusiasm. Through that very same technology, BTS, which came from a small production company here in a country in eastern Asia, has resonated with the world”.

He continued: “Global audiences have become fanatical about the music videos where Korean singers sing in Korean language and dance. Globally, the lyrics, dialogues, and messages of BTS are translated and shared worldwide, which has made BTS into The Beatles of the YouTube generation and a hero at the periphery. Conversely, the success of BTS has proved the existence and value of YouTube technology.”

Elham Mohamud and Liv Fitzsimons are the visionaries behind the First in Line podcast, exploring all forms of fan culture. “I would define fan culture as being really into an artist, to the point that you want to know more about them – not only listen to their music, but you want to follow them on social media, you want to go to multiple tour dates, you want to buy all their merchandise,” Liv says. “But then with K-pop, I think there’s a difference because there’s so much more content that is consumed. You buy the lightsticks, you watch the variety shows, you participate in Selca days [designated days involving fans imitating photographs of their favourite celebrities], you buy the albums.”

K-pop encourages fans to actively participate in and consume the content. It’s common for fans to purchase albums on CD, even if they have no means of playing them, and to enter lottery ticket ballots for a tiny chance to meet their favourite celebrities. Livestreams and a focus on digital content means international fans can actively participate from the other side of the world.

Liv and Elham note that many of the practices international K-pop fans participate in are – literally – foreign concepts. “I think that it is super important that if we are international fans occupying the space online, and supporting these artists, that we do be respectful of their culture,” Elham says. Technology also enables this process of learning: fan-translating accounts, from Korean to English as well as other languages, allow international fans to engage in real time. Initially, there weren’t any subtitles when engaging with Korean content until fans stepped up, contributing to the globalisation of K-pop even further just by using their social media accounts. “I think it’s a sign of fandoms getting smarter,” Elham says. “We know that technology continues to get smarter and be more developed, so it’s just bands evolving as technology does.”

The Power to Change the Internet

K-pop fans are able to manipulate and dominate social media conversation – when taken seriously – just by the volume of tweets and content produced. Fancams, collections of fan-created videos of a specific K-pop idol, are curated, produced and edited by fans. Often they illustrate fans’ bias towards their favourite member of a group: giving them the opportunity to focus on their favourite artist in performances (though, female K-pop idols are often objectified in fancams where there are obvious sexual undertones).

Fancams create vast amounts of content for a group’s international fans, and fans also host birthday parties and charity drives for their favourite celebrities. For BTS member Kim Taehyung’s birthday in December, fans celebrated by having an LED show for him on the Burj Khalifa. It’s not uncommon to see fancams littered under trending posts on Twitter in a bid to promote their favourite K-pop artists.

Often, the strategic fans behind these fancams are the best marketers and social media managers, from organising fan meetings with one another to fundraising.

Yeonjeong Kim, Twitter’s Head of Global K-pop Partnerships, noted that #KPopTwitter generated over 6.7 billion tweets globally in 2020, ranging from topics on social justice to discussing favourite songs. Fansites and fan accounts have garnered thousands of followers with daily and consistent content: testament to fans’ impressive dedication. Often, these fansites and accounts exist solely for the purpose of following a particular celebrity or group, such as @joysooyoungpics on Twitter: posting daily content of Red Velvet’s Park Sooyoung, also known as JOY.

“Where’s the peak of fandom?” Liv asks. “Because I thought the peak of fandom was One Direction, and now I’m like, ‘oh my god, BTS is the biggest fandom in the entire world’. Where’s the BTS peak? I don’t think there ever will be one, because after BTS there’ll be another BTS – another group just as big. There’s another artist all the time, and all these people are breaking records.”

By sustaining the practice of posting fancams – be it from concerts or even airports – it plays into the one-sided parasocial relationships that the K-pop industry has significantly exploited. K-pop idols are often marketed as role models that can do no wrong: your best friend. Due to this, and the exposure fans have, it’s easy to see these celebrities as people you know when this isn’t necessarily true. Often, the strategic fans behind these fancams are the best marketers and social media managers, from organising fan meetings with one another to fundraising. For instance, during the #ENDSARS movement, Nigerian fans of BTS, known as ARMYs, organised a fundraising initiative to support protesters. Furthermore, during the Black Lives Matter uprising during the summer of 2020, K-pop fans mobilised and flooded racist hashtags with fancams and memes, and bought out tickets for a Trump rally.

When it comes to stan activism or any type of online vigilantism, K-pop fans harness Twitter like no other. Fan-favourites SHINee, dubbed the Princes of K-pop, changed the internet forever following the suicide of lead vocalist Jonghyun in 2017. Faced by the possibility of Jonghyun’s Twitter account being deactivated and losing all the content, memories and interactions, fans mobilised globally to lobby the social media platform, and changed Twitter’s policy of deleting inactive accounts,

In reaction to Jonghyun’s suicide, the hashtag #YouDidWellJonghyun trended on Twitter. Years later, fan accounts still post daily content about him as an artist and as a person. On the second anniversary of his death in 2019, #JONGHYUN trended worldwide as fans honoured his legacy.

There is a Korean word for the fans who go too far: sasaengs (사생팬) or stalker fans. They may endanger their favourite K-pop artists just to get their attention, or by sharing their location to other fans – for a price. Nayeon from TWICE had encounters with a German stalker who wanted to “profess his love” for her by boarding her flight from Japan to Korea. It has become so bad that entertainment companies such as HYBE have publicly published names and details of blacklisted sasaengs.

K-pop artists are constantly under surveillance: from both fans and their management. To maintain their authentic yet unproblematic personas – which are often dictated by entertainment companies – often K-pop idols share further details of their lives to foster an emotional connection with their fans. This process of authentication can lead to profit for K-pop companies because fans are more willing to spend money on the idols that they worship. This may come at the expense of the K-pop artist’s privacy and sanity; regardless, fans will spend money.

K-pop artists are constantly under surveillance: from both fans and their management.To maintain their authentic yet unproblematic personas – which are often dictated by entertainment companies – often K-pop idols share further details of their lives to foster an emotional connection with their fans.

Some fans also try to dictate what their favourite celebrities do. There was an angry reaction from some fans after Jungkook from BTS got tattoos, including the name of the band’s ARMY fandom across his knuckles. Others went as far as copying them; more thoughtful fans expressed their appreciation of his tattoos as a way of him expressing himself. Jungkook has not commented publicly on the backlash to his tattoos, but did briefly respond to a positive comment in a Youtube livestream (from 19:47), thanking a fan for saying his body art was “the most beautiful”.

K-pop stans are a force to be reckoned with, and doubtlessly contribute to the industry’s success. Though fan platforms can be overwhelming, they are also spaces for fans to collaborate and connect. While BTS continue to break social media records, and the ARMY continues to grow, it would be an error to underestimate the impact of K-pop fans and their power on the internet.